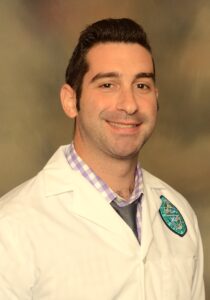 Dr. Justin Salerian is fellowship-trained in Vascular Neurology and is double Board Certified in both Neurology and Vascular Neurology by the American Board of Psychiatry and Neurology. He is the Director of Tulane’s Comprehensive Stroke Center. Dr. Salerian completed his neurology residency training at Georgetown University in Washington, DC; in his final year, he served as Chief Resident. He then completed his Vascular Neurology Fellowship at Tulane. He is an Assistant Professor of Neurology at Tulane and is deeply committed to training medical students, residents, and fellows to become world-class physicians. His interests in Neurology are broad-ranging, including stroke, acute care neurology, neuro-immunology, neuro-behavioral disorders, post-concussion syndromes, and epilepsy. He is trained in multiple neuro-diagnostic modalities, including neurovascular ultrasound and EEG. He performs botulinum toxin (Botox) injections with EMG guidance to treat spasticity. He serves as a physician in Tulane’s Professional Athlete Clinic, which is one of only four official National Football League Players Association (NFLPA) partnered sites around the country that has been entrusted to provide medical care for retired NFL players. Overall, his approach to medicine welcomes all patients, even those with the most challenging neurological disorders. As for his research interests, Dr. Salerian is currently a co-investigator in multiple clinical trials, including one testing a medical cooling suit that can induce rapid hypothermia (cooling) as a neuroprotection strategy in acute stroke. Notably, prior to medical school, Dr. Salerian was a paramedic and a filmmaker. He spent a year in South Africa working as a medic and then wrote and directed a critically acclaimed documentary inspired by this experience. The film is called Tell Me, and I Will Forget; it has been on Netflix and at film festivals worldwide.

Contact our office for more information or for an appointment with Dr. Salerian (sees patients Downtown).